You bought that Arduino chip off the web...

...and it lost its bootloader.

So just get the correct program into your board, make a few connections and you'll program that chip.

On this page an Arduino Nano is used as an ISP (In System Programmer) but you can use an Arduino Uno and others as well.

Using the Nano as an Arduino ISP

Not having an AVR programmer I wanted to program an ATMega328P for use as a bare-board Arduino, and one convenient way is to use an Arduino board as a an ISP.

The purpose of using an ISP programmer is to put back the bootloader, which all Arduino boards need before you can upload a program using the Arduino IDE.

You may have bought an unprogrammed chip that needs a bootloader to get it working with the IDE and in that case you can use the method here to re-program the device (of course you need at least one device with the bootloader already installed e.g. Arduino Uno or Nano). You can choose from many different Arduino boards to program your target board (Arduino.cc suggests ATmega, 32U4 or ATtiny - common ones are "Arduino Uno" and "Arduino Nano" as the programming device).

Note: MOSI, MISO and SCK are the same SPI pins used in chips that use the SPI interface in your own projects. RST is a signal from any I/O pin (it is not the Arduino board reset signal).

These (SPI) signals are connected to the same pins on programmer (Nano) and target (here the ATMega328P on a solderless breadboard). Notice how the names of the signals allow direct connection between different chips because they include the sources and target names. This is very different to RS232 where you have to remember to cross over Rx and TX signals!

The connections are always the same for programmer and target boards. So all you need to re-program the bootloader into an Arduino, is another Arduino! (with a bootloader already programmed into the chip)

Here the Nano is used as the Arduino ISP programmer. 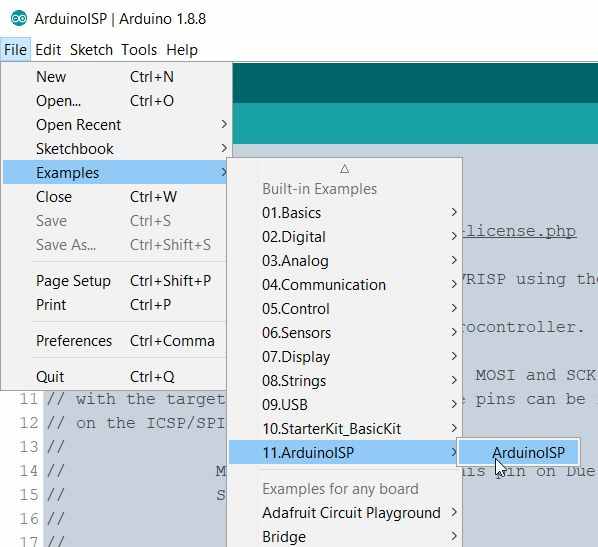 From the Tools Menu select four options:
They should all match the screen shot below - except for the Port number which you can find by clicking the port entry (as shown below). Program the sketch into the Nano.

After programming the board to create the Arduino ISP programmer, disconnect the USB cable and make the connections to the target board.

You have to connect all the SPI wires (see breadboard layout below) but you don't really need to connect the LEDs. One you might find useful is the heartbeat LED but it is not essential. This will pulse slowly on and off, showing that the ISP program is active in the Nano.

In the breadboard layout below the LED connections are:

TIP: Don't bother with the LEDs - See the screen shots of IDE output below - you can see the programming status easily on that.

You can choose which pins will be used for MOSI, MISO and SCK if you set PIN_MOSI, PIN_MISO and PIN_SCK to your desired pins - in the sketch (save the sketch as a different file to allow editing) - in this case the Ardino ISP sketch will use bit-banged SPI if these pins are not set to the standard SPI pins.

This is the schematic for the above (10pF should be 22pF as in list above).

Warning: Fritzing makes it really difficult to change component values (crystal capacitors) so I didn't! - also the schematic tool is bad (single net operation). I have not tried the PCB but have noticed it is not well regarded i.e. don't use it. Only use Fritzing for breadboard graphics as above. Select the Arduino as ISP from the "Programmer:" Option: The next step is to program the target board (Arduino ISP) with the bootloader: 
As an experiment I took out the Crystal before running the bootloader. This is the result:

This is interesting as the PIC microcontrollers do not require a crystal to program them but they do require high voltage unlike the Arduino. It also means that the ATmega328P will be more susceptible to bricking if the fuses are set badly and a bad clock configuration is made. Using information on this page that can never happen as the Arduino IDE sets these fuses - I am talking about when you set the fuses yourself when using AVRDude.

This is the result when you have successfully programmed the bootloader (it is also the reason that you don't really need the LEDs as you can see success or failure from the IDE status screen):

Using the bare-board Arduino requires that you have a USB to serial adapter that connects to the RX and Tx pins of the Arduino chip.

Note: The signals Rx and Tx must be crossed over at the ATmega328p. So:

In many cases the serial interface adapter will only have four connections:

This presents a problem as the Arduino schematic shows that the Arduino is reset at a specific time using another RS232 serial interface signal DTR (Data Terminal Ready). Its original function was obviously not a reset signal but it can be controlled by the sending PC and is activated (sent low) before the start of a programming data block (see scope trace signals below).

Without the DTR signal the programming sequence hangs. That is, unless you do a manual reset at the correct time - alternatively buy a serial adapter with the DTR signal as an output (and add the 100nF capacitor - see schematic below).

On Arduino boards another external signal starts bootloader - in fact it resets the board - this extra signal is called DTR (or Data Terminal Ready) - it is a separate output from the serial interface. A bootloader is only active for a few seconds at power up, or after a reset, after which control is passed to the 'previously-loaded' program.

When an RS232 transmission is started the sending equipment asserts DTR and this signal is used to perform a target reset (so the bootloader wakes up). In the Arduino Schematic a 100nF capacitor sits between this signal and the reset input of the ATMega328p (which is also pulled up by a 10k resistor - see C5 in the circuit below). This combination is used since DTR only changes state at the start and end of a sequence of byte transmissions. The idea is that when DTR goes low the Reset input is pulled low momentarily and then it is slowly pulled up to 5V by the 10k pull-up (RN1D). It is a sort of cheat reset method using the characteristics of capacitors to do the job.

The signal trace below shows the capacitor action - showing the reset pin of the Arduino (This is 1V/div and 500us/div, the voltage between blue horizontal lines is 4.7V - the lower blue line is 0V):

This reset system works because the reset input has a hysteresis level of 0.1V (at 5V supply) which creates a clean signal in the microcontroller that ignores noise on the slowly rising input.

In the trace below, when DTR goes high, a high voltage spike is created with a peak value of 9.12V! The scope settings are :at 2V/div, 5ms/div, high blue line is at 9.12V, yellow horizontal signal is at 4.7V:

Note: The reason that the ATmega328P can handle this higher voltage is that the RESET input pin is specified for operation up to 13V, probably for high voltage programming. You can not do this on other pins!

The time between DTR low and DTR high depends on how long the programming takes - for the the blink sketch it is 1.9seconds.


It is possible to program the bare-board Arduino using a 4-connection-serial-adapter but only if you use a manual reset button on the target board. The key thing to get right is to push the reset button at the correct time during the programming process. This does mean you have to keep an eye on the IDE and what it is doing!

Alternatively: Remember to buy a serial to USB adapter that has a breakout pin with the DTR signal available - add the 100nF capacitor between DTR and the reset pin, and the 10k pull-up from the reset pin to 5V, and it's ready to go.

Here is the setup for a 4-connector USB to serial adapter connected to the bare-board Arduino:

If you don't push the reset button at all then you will get this IDE status message:

If you push-and-release the button too soon the compiler will be still compiling and programming will fail.

If you push-and-release the button too late you will get a programming failure message.

However if you push and release the button just after the "Uploading" text appears in the IDE then you get the following:

You can try out the following sketch on the bare-board Arduino (attach an LED via 1k resistor to D13 and to ground - pin 19 of the ATmega328P):